Gresford Trust is delighted that the work done by its volunteers is acknowledged in such a public and positive manner as to be awarded The Queen’s Award for Voluntary Service; the MBE for volunteer groups.

The Queen’s Award for Voluntary Service is awarded in recognition of the excellence in voluntary activities carried out by the Trust. Gresford Trust manages extensive social and recreational facilities for the benefit of the local community which comprises the villages of Gresford and Marford and the surrounding area. Trustees are appointed at the annual general meeting with twelve village representatives and sixteen representatives from affiliated organizations and clubs.

Gresford Trust is gratified that the independent Assessment Committee, chaired by Sir Martyn Lewis CBE, very much admired the work that our voluntary group does for the community.

The award of The Queen’s Award for Voluntary Service 2016 represents a tremendous achievement for our organization. Everyone involved in the smooth running of the Trust; our Trustees representing the villages and affiliated organizations, our Facilities’ supervisor, cleaners and groundsmen all have reason to feel immensely proud of the recognition that this Award represents.

Lord Thomas of Gresford made the following statement about the Trust as part of the Active Citizenship debate in the House of Lords in 2010. “The message from Gresford is that it can be done. There is an abundance of talent and drive in our communities which, if it comes together, will achieve great things.”

This gives credibility to our mission statement ‘Run by the village for the village’. 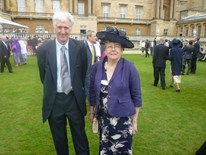